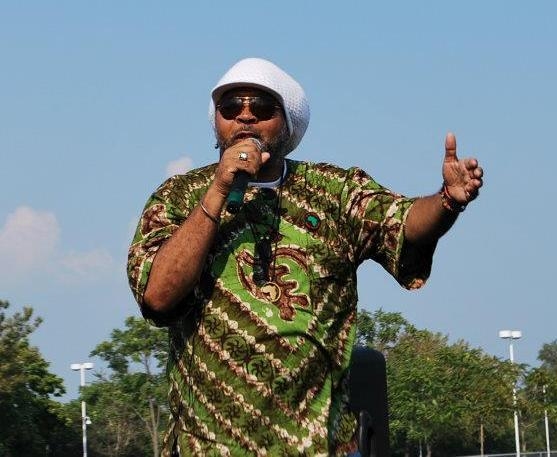 Our comrade, brother and friend, Shabaka Ture joined the ranks of our immortal ancestors on Thursday July 2, 2015 in Columbus, Ohio, U.S.A. at the age of 60 following a long courageous fight with colon cancer. Shabaka Ture was born on July 23rd, 1954 in Cincinnati, Ohio, U.S.A. He attended Cincinnati Public Schools and was a standout football player in High School. Shabaka attended the Ohio State University from 1973 until 1977. Shabaka was recruited by the university as part of an outreach initiative forced upon the university to recruit students from underserved African communities as follow-up to the courageous student uprisings led by African students in 1970 at Ohio State. He became a member of the All-African Students and Faculty Union as a freshman and later, after hearing Kwame Ture (F.K.A Stokely Carmichael) speak at an A-APRP Recruitment Drive in October 1973, Shabaka joined the All-African People's Revolutionary Party (A-APRP). This was the beginning of his life of commitment to fighting for the masses of African people and the whole of humanity. He was an avid organizer for the A-APRP and was always willing to do whatever it took and to go wherever the African Revolution took him to do the work of building a Revolutionary Mass-Based Pan-African political party. He traveled around the world attending meetings, marches, and rallies as part of the work to build our party in addition to working with many different organized groups of people from different nationalities, faiths, beliefs and ethnicities. His revolutionary work focused on Youth, Women and African people, those at home and in the Diaspora. Shabaka organized for Pan-African unity in every phase and area of his life. In his professional career, Shabaka worked with many brothers and sisters born in Africa when he became self-employed after starting his own taxi company. He was a labor advocate for African Taxi Drivers who were historically exploited and mistreated by city authorities and taxi companies in the city. Shabaka was also an independent disk jockey. He was well known as Shabaka The C-City Rocka and performed as a DJ at many events for the A-APRP, the Ethiopian, Somalian and other communities located in Columbus and surrounding areas. Shabaka founded and maintained an Internet Radio Station called Blue Nile Radio featuring positive African music. He was also a licensed minister and was developing and planning to start a revolutionary ministry. One of comrade Shabaka's most important trips was his sojourn to Africa in 2008. He visited Ghana and participated in African Liberation Day organized by the Ghana Chapter of the A-APRP. He visited the gravesite of Osagyefo Kwame Nkrumah (founder of the A-APRP) and the slave castles at Cape Coast, Ghana. He continued on to Azania/South Africa where he did solidarity work with comrades from the Pan-Africanist Congress of Azania (PAC), one of the A-APRPs sister organizations. Throughout his years as a member of the A-APRP, Shabaka consistently worked and demonstrated the necessity to organize for Pan-Africanism and for the World Socialist Revolution. In 2014, Shabaka was elected to the Central Committee of the All-African People's Revolutionary Party (A-APRP) where he served until his transition. Brother Shabaka was a man of many talents. He was a gifted lyricist, DJ, entrepreneur, public speaker, political organizer, ordained minister and a proud father. If our brother could speak to us he would probably say, "don't shed tears for me or be sad because I'm going to join our ancestors." And if we listen closely we can hear them encouraging us still with these words--Aluta Continua (the struggle continues) and Elizema Tutashinde! (we shall win!) http://www.aaprp-intl.org/ancestor-page/honoring-ancestor-shabaka-ture