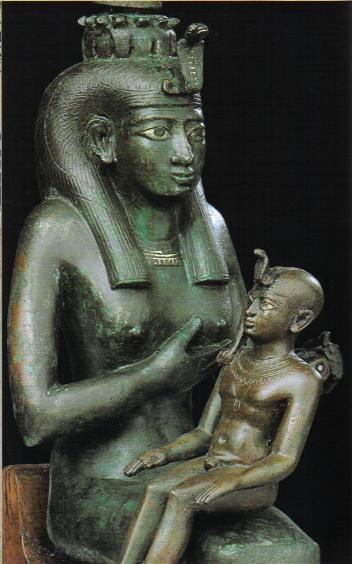 The following are a few similarities, as they relate to the theological principles and practices, between Ancient Egypt and the Bible:

The new religion (Christianity) which was preached there by St. Mark and his immediate followers, in all essentials so closely resembled that which was the outcome of the worship of Osiris, Isis, and Horus that popular opposition was entirely disarmed.

The similarities, noted by Budge and everyone who has compared the Egyptian Ausar/Auset/Heru (Osiris/Isis/Horus) allegory to the Gospel story, are powerful. Both accounts are practically the same, e.g. the supernatural conception, the divine birth, the struggles against the enemy in the wilderness, and the resurrection from the dead to eternal life. The main difference between them, is that the Gospel tale is considered historical and the Ausar/Auset/Heru (Osiris/Isis/Horus) cycle is an allegory. The spiritual message of the Ausar/Auset/Heru allegory and the Christian revelation is exactly the same.

Many elements of the Auset (Isis) myth and the story of the Virgin Mary are very similar,

for both were able to conceive without the male impregnation. Heru (Horus) was conceived and born after the death of Auset's husband, namely Ausar (Osiris), and as such, she was revered as the Virgin Mother.

Auset (Isis) represents the divine power responsible for the creation of all living creatures.

According to ancient legend, any woman who truly loves her husband is Auset (Isis), and has the power of awakening him into greater life as Heru (Horus). Father S.J. Vann draws a similar comparison to the awakening of Christ by Mary Magdalene as Christ emerges from the tomb.

The spheres of angels and archangels in Christianity are strikingly similar to Ancient Egypt’s heirachy of neteru (gods/goddesses).

The Song of Moses in Deuteronomy (32:43), as found in a cave at Qumran near the Dead Sea, mentions the word gods in the plural: “Rejoice, O heavens, with him; and do obeisance to him, ye gods.” When the passage is quoted in the New Testament (Hebrews, 1:6), the word gods is substituted with angels of God. As such, The neteru who were called gods by some, were endorsed and incorporated into Christianity under a new name, angels.

The typical Egyptian sowing and reaping scene is symbolically similar to the Bible’s “Whatsoever a man soweth, that shall he also reap.”

A recurrent theme on the walls of many Egyptian tombs is the relief of a woman shown sniffing at the lotus.

The lotus played a complex and significant role in the symbolism of Egypt. The perfume of the lotus is its spiritualized essence, similar to the odor of sanctity in the Christian traditions.

Various fishing nets and traps are portrayed on the walls of the Ancient Egyptian tombs.

In other texts, Heru (Horus) becomes a fisherman and his four disciples ("sons") also fish for him.

This is another parallel between Christian and Egyptian symbolism. Christ used the symbolism several times and he made his disciples Fishers of men.

The most distinctive Egyptian symbol is the eye, which plays many complex and subtle roles.

The eye is the part of the body able to perceive the light, and is therefore a symbol for the spiritual ability.

One of the texts, in the Egyptian Book of the Caverns, describes the unilluminated:

They are like this, those who do not see the Great God, who do not perceive the rays of his disk, whose souls do not leave the earth, who do not hear the words of this Great God when he passes near to their cavern.

The description is very similar to the Gospel references to those with “eyes to see and ears to hear”.

Dancing at the temples was common for both Egyptians and biblical characters.

In the Hall of Offerings, at Dendera Temple, a song celebrating the taming of the lioness, goes:

The King of Egypt, Pharaoh comes to dance

He comes to sing.

You, his Lady, see how he dances,

See how he springs.

Similarly, Christ is celebrated as “Lord of the Dance” in a Christmas carol from the Middle Ages.

The Biblical David himself danced before the ark (I Chron, 15:29).

The Jews considered it part of their religious duties to approach the Deity with the dance, with the timbrel, and with the harp (Exodus, 15:20).

The mode by which the Jews worshipped the golden calf consisted of songs and dancing; which was immediately derived from the ceremonies of the Egyptians.

The Egyptian word for paper was pa-pe-ra. The Greeks called it papyrus. One can easily see that the English word, paper, came from the Egyptian pa-pe-ra.

Your dictionary will also confirm that the word Bible is of an Egyptian origin. The Bible, or book, was derived from byblos, which is the Egyptian hieratic word for papyrus.

There are many Egyptian texts that have notable parallels in the Bible, and outstanding among them is the hymn composed in honor of the Aton by Akhenaton, and Psalm 104. They are both amazingly similar in all particulars, sequence and images.

The theme in the Egyptian Book of the Caverns talks about the necessity for death and dissolution (of the carnal and material), prior to the birth of the spiritual. This is echoed by the biblical Jesus when he says, "Except a corn of wheat fall into the ground and die, it abideth alone: but if it die, it bringeth forth much fruit" [John 12:24]. Paul also refers to the same principle in I Corinthians 15:36, ". . . that which thou sowest is not quickened, except it die."

A text from the Egyptian Book of Night reads:

To come out of the Netherworld, to rest in the Morning Barge, to navigate the Abyss until the hour of Re, She who sees the beauty of her Lord, to make transformations in Khepri, to rise to the horizon, to enter the mouth, to come out of the vulva, to burst forth out of the Gate of the Horizon of the Hour, She who lifts up the beauty of Ra in order to make live men, all cattle, all worms he has created.

The Ancient Egyptian text is very similar to Genesis 1:24, where God says,

Let the earth bring forth the living creature after his kind, cattle, and creeping thing ...

The thirty chapters of the Teaching of Amenemope (Amenhotep III) contain many wisdom texts which were later adopted in the Old Testament’s Book of Proverbs. Numerous verbal parallels occur between this Egyptian text and the Bible, such as the opening lines of the first chapter:

Give your ears, listen to the words which are spoken, give your mind to interpreting them. It is profitable to put them in your heart.

The Egyptian Book of the Coming Forth by Day (commonly known as the Book of the Dead), the oldest written text in the world, contains a strikingly parallel passage,

In the three religions of Judaism, Christianity and Islam, whenever the faithful pray, regardless of language, they always end their prayer by saying Amen. There is no linguistic translation for Amen, because it is a name and not a word. The origin of Amen is Egyptian, for Amen was the name of God. The Jews have learned about Amen during their sojourn in Egypt, which lasted for four generations.

The name of Amen, which means the Hidden One, in Ancient Egypt, lives on.

Khnum, in Egyptian, means molder. Khnum is usually shown as a ram-headed deity working at his potter’s wheel, fashioning men and all living creatures out of clay.

A passage from an Egyptian creation legend by Khnum follows:

The mud of the Nile, heated to excess by the Sun, fermented and generated, without seeds, the races of men and animals.

Passages of the Bible leave no doubt about the belief in the concept of the Divine Potter. Genesis, 2:7 mentions the material used to make man, the same type of substance used by Khnum:

And the Lord God formed man of the dust of the ground, and breathed into his nostrils the breath of life; and man became a living soul.

The well-known Ancient Egyptian illustration showing Khnum, the Divine Potter, at his potter’s wheel, fashioning men from clay, was echoed thousands of years later in Isaiah, 64:8: