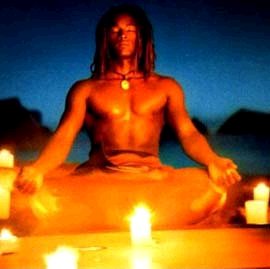 Shems is a ancient Egyptian word that means followers and in modern times denotes one who partakes of the culture in an active manner. The term used for the practioners of Kemetic Yoga is Shems n Nebedjer, which means 'Followers of God', or to emulate God through ones physical actions that are guided by virtue and thoughts which are guided by right reason. In this case 'God' signifies the transcendental all encompassing reality that is without name and form but expresses as the lesser divinities which are called Gods and Goddesses which in the Kemetic language are called NETERU.

The correct propitiation of any Neter can lead one to the trascendental reality from which they all emerge from. This process is called SMAI TAWI. Smai Tawi is the ancient Egyptian phrase that means YOGA, which denotes a unification of the higher and lower nature of the human persoanlity. This is also called Heru Smai Set.

The reason why this blog is called Kemetic Mysticism is because these are disciplines that assisst in developing profound levels of inner harmony and peace that are then transformed into God Realization, which is the awakening to, and experience of ones expansive and immortal nature, ones true state of existence. The awakening to ones higher nature is termed NEHAST and is commonly referred to in contemporary times as ENLIGHTENMENT.

This then is the first teaching in the process of Mystic Integration. Mystic Integration means that the personality will develop an internal harmony that transcends the time and space aspect of being into the transcendent reality, the goal of the Egyptian Mysteries. This process is commonly referred to as yoga and the Kemetic term for it is Smai Tawi. The method is Smai Tawi and the aim is to develop a well integrated personality through the study and development of the four aspects of the human personality which are the will, the emotions, the intellect and actions. Therefore, there is a four fold program that can be practiced daily in a harmonious and balanced manner.

The program should start with the reading of scriptures (Intellect), then proceed to the physical postures of the Journey of Ra for 4 to 6 repetitions, after warm up exercises for the large muscles of the legs and lower back, and living by Maat {Righteous and Order} (Action), then proceed to the devotional aspect in the way of chanting words of power (Emotions) and conclude with meditation for 5 to 15 minutes (Will).

This whole series can take from 45 minutes to an hour until one becomes more proficient in all of the areas and the time duration increases. Start slowly and gently refrain from rushing your progress. The end all of this process is the acquisition of wisdom that leads to a penetration of mysteries of life, the mysteries of death, the mysteries of the universe and the attainment of immortality, the ultimate human endeavor and the onlt real and true goal of life.